Organized by the Harvard Club of Minnesota 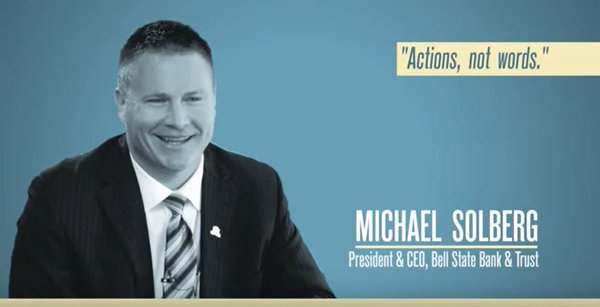 Although every industry has its challenges, some sectors must compete amidst tremendous technological innovation and disruption, changing customer expectations and a highly commoditized array of products and services that make it difficult to differentiate. One of those sectors is banking. Yet, while a significant percentage of banks have either folded or been sold during the past ten years, Bell Bank has experienced rapid growth to become one of the largest independent banks in the country. Michael Solberg, CEO, will share how his organization has organically grown its assets by $3 billion over the last ten years, largely belying industry trends, especially following the recession. Solberg’s team redefined their bottom line in order to grow the bottom line – more fully developing a culture that balances care for people with attention to results. Solberg will explain the “magic” behind several unique programs that have strengthened Bell’s company values and helped make even the most mundane jobs meaningful and positive.
Michael Solberg is president and chief executive officer of Bell Bank, headquartered in his hometown of Fargo, N.D. He has worked for the company since 1998.

With over $4 billion in bank assets and $5 billion in trust assets, Bell Bank is one of the largest independently owned banks in the country and is the largest in Minnesota and the Dakotas. The bank is also one of the region’s largest home mortgage providers, originating over $2 billion annually. Nationally, Bell is a leader in consumer-driven healthcare, with its HealthCare Bank division and affiliated company, Discovery Benefits, serving more than 7 million consumers across the country.
Bell Bank’s commitment to its staff and community has been highlighted by media outlets including the CBS Evening News, BBC, Good Morning America, USA Today and People magazine for its “Pay It Forward” project, launched by Solberg, which annually provides every full-time employee with $1,000 to give to individuals, families or organizations in need. To date, the program has given over $10 million.

Michael holds degrees from Concordia College (Moorhead, Minn.) and William Mitchell College of Law (Saint Paul). He has served as campaign chair for the United Way of Cass Clay, board chair for the Trollwood Performing Arts School and served on the Concordia College Board of Regents. He currently is on the board of Prairie Heights Community Church, The Bush Foundation and The Guthrie Theater. He and his wife, Charleen, live in Fargo with their three children.